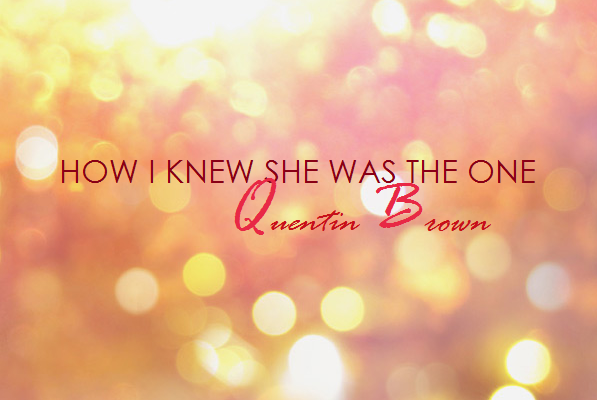 I honestly didn’t know she was the one for me until I found myself madly in love with her.  I literally cannot imagine her with anyone else besides me.  Love, I mean…it’s a pretty big deal and it drives us crazy. One would think finding someone to love, who will also love you in return would be a challenge. We can all agree, it is challenging… but as men, we know when we have found the one.

Instinctively, as humans we all want the best! Myself, like most men, want the absolute best when it comes to women – a woman who is smart, intelligent, stylish, beautiful, charismatic, silly, disciplined, sexy, ambitious, nurturing, motivating and the list goes on. Some men would say, “find me a woman with some of those characteristics and I will make it work.” Fortunately, I was lucky enough to find a woman with all of those characteristics. One day it hit me, and it all started there – a vacation that turned tragic.

Growing up, I saw beautiful women on TV and often wondered where I could find one.  Paradise, Bermuda…the most beautiful place I have ever seen with my own eyes.  Hamilton Bermuda, my now fiance’s birthplace…pink sand, gorgeous people and water so clear you wouldn’t believe it was real.  The food, simply amazing.  Life seemed to make more sense there, and my passion for her began to grow.

Midway through our trip, we were scheduled to take a jet ski tour around the entire island.  Madonna and I were traveling on the same ski at a very high rate of speed when we approached the wake of a large boat that had just passed. Wham! The ski traveling around 45MPH created a brutal collision when it hit the wave created by the vessel that had just passed.

We were both violently thrown from the jetski into the deep, crystal clear waters of the Atlantic ocean.

As I swam to the surface, of course my concern was Madonna.  Upon reaching the surface, I looked around and there she was – gasping for air while searching for me. She yelled, “Are you ok? Are you alright?” and to her surprise, I was fine. Immediately, I asked her the same two questions. She hesitated and responded, “I think I’m injured, I think it’s my foot.” As we both climbed back on to the jet ski, her pain worsened and I soon realized the severity of her injury.  As a former athlete, I assumed that she had sprained her ankle and I figured she would be okay after some “RNR” and ice.

We continued the jet ski tour and we were all smiles, nothing mattered at that time.  Zipping through the water, exploring old ship wrecks – I was even able to snorkel through some shallow island reefs.  Together, we hand-fed large schools of fish, took amazing pictures and many videos to capture every moment.  As the tour concluded, we hopped off of the jet ski and to my surprise, my love was unable to walk.  Immediately, we rushed her to the hospital. It turned out that my baby had broken her the lower leg near her ankle!  After hearing this news, I felt like sh*t!  Madonna had jeopardized further injury, continued on the tour and endured extreme pain for several

hours following the wipe out. The only thing that mattered to her was me … I was overwhelmed with emotions. This meant so much to me.

At that very moment, I knew she was special and I needed to have her in my life. That feeling only got stronger and more defined when we returned to the states.  Although she was going to be restricted to a cast for the next six weeks, she didn’t allow that to slow her down.  She lived on the 3rd floor of an apartment complex, was in her 3rd year of law school, attended summer classes, and continued a workout regimen that would put most athletes to shame.  I mean, she was going harder than ever…and believe me, nothing ever came easy.  In the end, her determination, will power, and physical strength showed me that this was the person I wanted in my corner.

She was on pace to do amazing things in life and I needed her all around me.

If she’s in the front, I got her back. When I take the lead, she’s right there backing my every move.  I had found my life mate and I wasn’t going to go through life without her.  To top it off, she managed to get in the best physical shape of her life, losing over 60lbs, graduating from law school [with honors cords], and more importantly…won my entire heart in the process.

Throughout the ups and downs she has loved me unconditionally.  Everything she is and everything she displayed only proved that true love really does exist…and that it’s not necessary to settle either. I found a woman who is selfless, faithful, fit, determined, loving, caring and drop dead gorgeous. She is my cheerleader and I will commit to showing her all of the love she has shown me – even if it takes until the end of time to do so. I could carry on, and on, and on, and on, and on about why she is the one for me. That vacation that turned “tragic”, was the beginning of an era.

She is the woman of my dreams and I no longer have to fall asleep to find her.

Josie is an aspiring writer living in Chicago Illinois, inspiring self-love through her own tragicomic life journey. Follow Josie as she details her collection of dating fails, life lessons and heart-to-heart confessions with her nosy readers.

7 Comments on Quentin Brown: How I Knew She Was The One

Josie is an aspiring writer living in Chicago Illinois, inspiring self-love through her own tragicomic life journey. Follow Josie as she details her collection of dating fails, life lessons and heart-to-heart confessions with her nosy readers.

©Nosy Josie. Unauthorized use and/or duplication of this material without express and written permission from this blog's author and/or owner is strictly prohibited. Excerpts and links may be used, provided that full and clear credit is given to me and mindjobusiness.com with appropriate and specific direction to the original content.